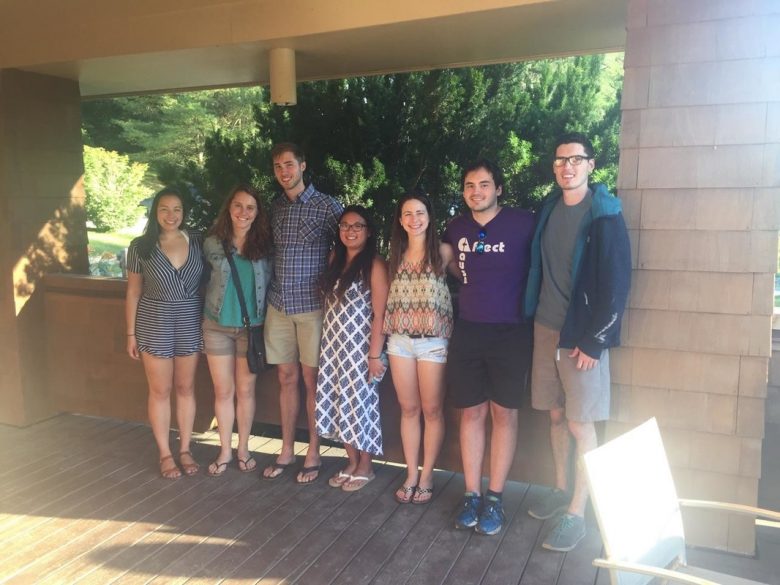 The fourth of July was a few weeks ago, but it doesn’t seem like all that much time has passed because I’ve been keeping busy with work and my continued adventures in the Quechee area. Back on that holiday weekend, Jacodie and I had our hands full around the condo because we had 7 guests staying with us: four of my friends from IL, her boyfriend Donald from D.C., and two more friends from NYC and Boston. Needless to say, there was a lot more energy around our place and in fact it was the first time anyone other than ourselves had been inside our humble abode.

My high school friends drove 14 hours through the night, taking ~4-hour driving shifts to see the magical land of Bernie and Ben & Jerry’s. The other two had a much more reasonable 5-hour drive from CT, stopping in Boston along the way, and Jacodie drove down to pick up Donald from the Boston Logan Airport. After giving everyone some time to catch up on real sleep (we all know car sleep is completely restless and just leads to back pain), I began my stint as tour guide for my visitors. I first took them to the Quechee Gorge for a swim and to bask outside for a couple hours before our planned 4th of July cookout. The gorge has a nice swimming hole area, but requires walking around on some jagged rocks to reach the water. While I was running around leaping from rock to rock on my calloused feet like a gazelle, everyone else was slowly and deliberately edging across the outcrop trying not to fall or cut their feet. Luckily, everyone made it out unscathed and we had warm, sunny weather before heading back to the condo.

Jacodie and I had planned a party the night of the third to host other interns and enjoy the company of old and new friends alike. We fired up the grill, stationed everyone around the kitchen, and churned out a feast of burgers, corn, salmon fillets, rice, and veggies. Later, the others arrived and we hung out around a bonfire, tried not to burn down Quechee with our giant sparklers, and went to bed stuffed with s’mores, snacks, and beer.

We had beautiful weather here for the 4th of July and after letting everyone sleep in (but not too long), we headed out for a day of hiking on the Mt. Ascutney Weathersfield Trail.

About 25 minutes south of Quechee, Ascutney offers a variety of trails ranging in length and difficulty. I’d never been before, but the area was highly recommended by other interns and coworkers. The trail we chose was about 3 miles long and included a scenic view from the top of a waterfall along the way to the summit. The seven of us trudged our way up the mountain, catching up on summer stories and marveling at the scenic outlooks along the way. At one point, the front of the group stopped because they thought they saw a bear cub waddling up the trail and were afraid mama bear might be lurking nearby. Curious as I am, I ran ahead to scope out the situation and realized that it wasn’t a bear cub, but instead a massive plump porcupine that was probably startled by all the noise we’d been making. We didn’t quite make the summit, due to emerging feelings of hanger (hungry anger), but we did get some beautiful photos of the waterfall.

After a hasty descent back to our cars (food is the best motivator from my experience), we rushed back to the condo for some quick showers before dinner. The Worthy Kitchen is a highly touted restaurant in Woodstock (where I work) and we decided to check out their innovative menu and offering of over 18 draft beers. Because the Woodstock aura is a bit upscale, I expected it to be more fancy, but was pleasantly surprised by the relaxed atmosphere. And the food. Wow. I ordered a brisket sandwich that had hints of maple sugar that was delicious. Others tried the fried chicken, mac ‘n cheese, and bulgogi burrito dishes, all of which were just as tasty. It was a bit pricey (unsurprising for the area), but definitely worth it for a nice meal out with a great group of friends.

The IL crew wasn’t leaving until the next day, but my friends Wenbo and Amanda had to drive back that night to get ready for work the next morning. Oh the life of a recent college grad transitioning into the daily grind. I was so happy to be able to share glimpses of my life in Vermont with friends and that they were willing to brave the green mountain state to see me.

Work has been flying by as well, with 7 of the 12 internship weeks already behind us. The days oscillate between long days of outdoor plant pulling and indoor computer work providing us with a good mix to keep us refreshed and going. Jacodie and I both have backgrounds with GIS (geographic information systems), so we’ve been helping to clean up the park’s invasive species tracking database using ArcMap (GIS software) and create up-to-date maps of the invasive populations. We’ve become masters of identifying invasive Vermont plants (what a resumé builder) and at trekking through the woods at 75 degree inclines, swinging from tree to tree like Tarzan to avoid tumbling down the mountain. We used to call one of our middle school teachers ‘Thunder Thighs’, which thinking back is kind of terrible, but I’m starting to think I should take over the nickname with my thighs of steel from hiking every day. Our boss Christine is also subject to when Jacodie and I go into hysterical laughing fits usually right before lunchtime and probably the product of slight heat stroke, picking too many plants, and just finding small things in the day to laugh about.

There have been some really rewarding days of work, like leading a horde of 20+ people (other interns, park staff, and a Vermont Youth Conservation Corps crew) on a daylong invasive plant pull at the nearby Mt. Peg Park also in Woodstock. There have also been days that make me want to crawl back into bed and forget about plants for a lifetime. One of the plants we have to remove is called Poison Parsnip (affectionately called ‘The Snips’ by my friend Nicole) and it’s a nasty little thing. It contains phytotoxins that can cause extreme burns and blisters on skin when exposed to sunlight. Jacodie and I (and Christine) had to spend an entire day in blazing heat removing all the poison parsnip from a massive field, walking up and down a mountain slope to massacre any surviving plants that may have been hiding. After a while (again this may have been from heat stroke) it felt pretty good, almost in serial killer fashion, to take out these unsuspecting plants. And to think I could have spent the summer working retail or a desk job back in Chicago.

The weekend of my birthday was just what I needed to enter into my 22nd year of existence. Basically for the entire weekend, there was a steady rainfall that justified my decision to stay inside and catch up on rest and relaxation. I didn’t even listen to T Swift’s 22, kind of put off by her all too frequent media drama and choosing to celebrate in my own kind of way with chicken fingers and applesauce. On my actual birthday, Jacodie and I went to our friends’ house at the Saint-Gaudens National Historic Site, about 30 minutes from our condo.

There are five interns living and working at that site: Catrina, Morgan, Sarah, Tarra, and Thaddeus. They live in an old park house together and bond over the house’s generous offerings of uncomfortable office furniture, a scary murder dungeon basement, and a riveting board game selection. Catrina, Tarra, and Thaddeus are all curatorial interns, maintaining the site’s collections, Morgan is the resident sculptor, and Sarah is an interpretive intern who gives tours and helps out with the front desk. They hosted a wine and cheese party (that happened to fall on my birthday) and we all made our way to their place to indulge in good cheese, beer, wine, and other little food items that people prepared for the occasion. I ate my fair share of pigs-in-a-blanket, strawberry shortcake, Vermont cheese and crackers, and ginger cider and then capped off a great birthday with my first ever game of Scattergories. Fun fact, there are many Pokéstops at Saint-Gaudens as well, useful information for a terrible Pokémon Go player like myself.

Although my internship provides stipends for food and gas, I’m still not making any money this summer by becoming a mountain man. So, I decided to find some part-time work for after my NPS job and on the weekends to save up a little cash. I took on some work for local families in South Woodstock, helping them with yard work and chores like washing cars, weeding, moving boxes, and packing. Not only has it been a good way to save up some spending money (in fact, I just bought round-trip tickets to go back to Copenhagen in October for only $420!) but also I’ve met some interesting people and gotten great local recommendations for food and sightseeing. This has meant little time to sleep in on the weekends (still 7:30/8 am starts), but it’s felt great to have this kind of a consistent early start to the day.

Despite all the extra hours working, I’ve still found time to keep up with the people I’ve met here and my leisure activities. I had the opportunity to play tennis with my new friend Nita and her husband Stan, a 71-year-old couple who are leaving here in about a week but are still quite the athletes. I also took a trip to the highly-touted Wade’s Place, a local ice cream haven in NH that offers a ridiculous amount of flavors and a tot-sized $2 ice cream that puts an Oberweis large to shame. I also took the Harpoon Brewery Tour (making sure to fully utilize the 15-minute open bar portion to try as many beers as possible), spent an afternoon at a local lake beach with diving boards and actual sand, visited the SCA headquarters in Charlestown, NH, and am able to touch my toes for the first time after a month of hot yoga.

This past weekend, I decided to travel to Burlington (Vermont’s biggest city) to play in a waterfront tennis tournament. It was a spur of the moment decision, just for fun and to get out of Quechee for a bit. I stayed at the Burlington Hostel Friday night after my first match (a 6-0, 6-1 victory) and a great dinner at a local place called the Skinny Pancake. It offers all-day breakfast and fantastic live music at night. I work up early on Saturday to a free hostel waffle breakfast and ready to play some more matches. I ended up losing a three-set epic (5-7, 7-6, 6-7) that lasted over 3 hours not counting rain delays and switching to indoor courts, but it was a great day-and-a-half away from the area. Burlington is a beautiful city along Lake Champlain and I hope to return one day to enjoy the lakefront bike paths and other offerings there. For now, I’m getting back into the work week and still preparing for life ahead after the internship is over. I’ll be back in IL soon, but not before I get to host my parents, pull some more plants, and hopefully get up to Montreal at some point.

Until next time,
Nathan 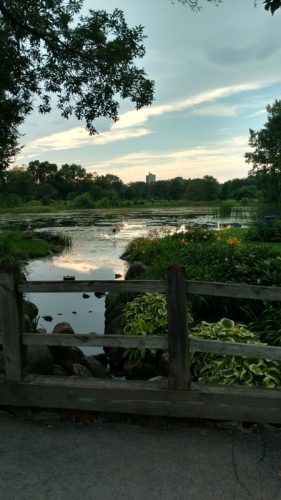 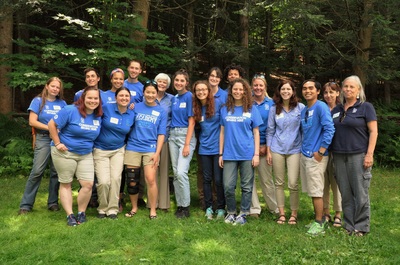 I Almost Hit Scarlett Johansson with a Table 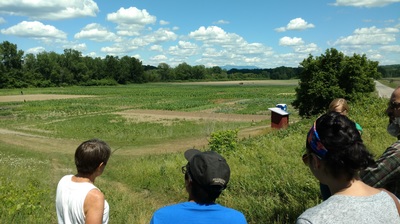 Dining with a Local Religious Cult