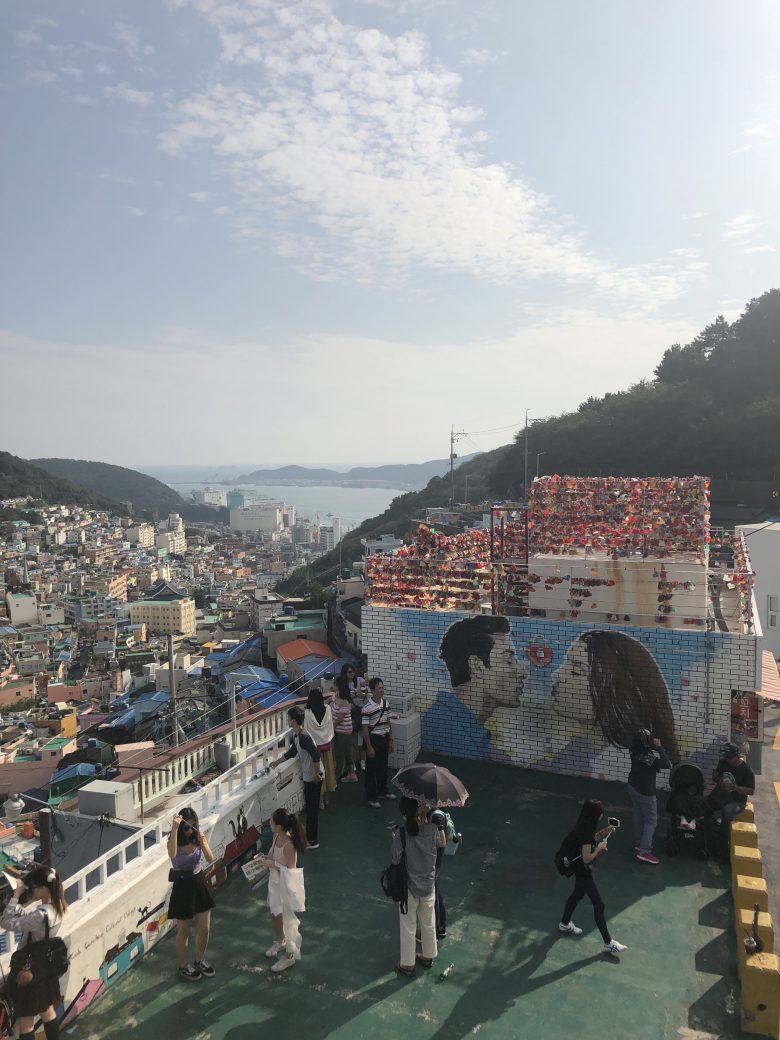 I was carefully debating whether or not I should bring my suit back to Korea after being home this summer.  Going back and forth, weighing the pros and cons, I found it surprisingly difficult to make a decision.  My budding adult sensibilities were telling me that a suit is a must-have in a person’s wardrobe.  Should I attend a formal school event or one of the Fulbright conferences it could come in handy.  Be a grownup.  On the other hand, my school tends to lean toward a casual dress code and I’ve always interpreted the Fulbright “business casual” to be business functional (a.k.a. especially casual and something that easily fits in a duffel).  Hence why I thought a full suit would be a waste of space and an unnecessary nuisance later on when I need to figure out how to get all my stuff home to Chicago.

Little did I know that my first week of second semester would already give me cause to appreciate bringing my suit to Cheongju instead of loading more snacks into my dangerously-full check-in luggage.  One of the English teachers at my school, an affable 32-year-old with a contagious smile and laugh and also my co-sponsor of the English 동아리, was getting married in mid-September.  A side-note about the English club that we sponsor… the  participating students are hilarious, but they couldn’t give a rat’s ass about English.  We’ve survived some interesting moments on Wednesday afternoons with that club class, usually discussing something English-related maybe 20% of the time.

Naturally, I was really grateful to be invited to his wedding along with other teachers, friends, and even students from Heungdeok High School.  Given that I had just attended two of my cousins’ weddings in the past 2 months and most people at school knew about my family nuptial escapades, I fielded a lot of questions about the differences between Korean and Western weddings.  I know my life is extremely newsworthy and all my adventures are worth chronicling, but I would think that other teachers have more interesting things to discuss than my family weddings or my weekend trips to Seoul (should I start logging trips to the bathroom too?).  But in all honesty, I appreciate that people take interest in my life outside the school and have questions for me.  I just enjoy sounding like a brat when I tell my stories ^_^.

It wasn’t until I attended 승현’s wedding that I could appreciate the notable differences in wedding culture.  I’ll start with the wedding prep.  In the U.S., before attending a wedding you have to RSVP and choose your meal, buy a gift off the couple’s registry, and maybe take your suit to the dry cleaner’s.  I honestly am dumbfounded by the ridiculous per-person cost of weddings these days, but because it’s so expensive the number of attendees and such is important.  Who cares if I pick the chicken, the beef, or the vegetarian option?  All roads lead to disappointment and you can be certain my mind has already moved on to the cake.

However, in Korea everything feels very different.  It’s hard to describe how small aspects of something like a wedding can reflect larger cultural differences and preferences, but I’ll try my best.  The first thing I questioned was whether I should even wear a suit to the wedding.  On a daily basis I see Korean businessmen donning suits, but usually other teachers don’t dress formally at school (except for the principal and vice principal).  As you might be aware (from word-of-mouth, photos of Korean celebrities, stereotypes, etc.) Korean people are very conscious of outward appearance and “looking the part”.  It would make sense that people dress up for any formal event like a wedding, but I still wanted to ask.

When I approached 승현 with this question, he revealed that some men wear suits but there are also a lot who dress casually.  I opted to dress nicely, but without the suit; I was actually surprised by how many people at the ceremony looked like they were just going for a walk around the block.  There was a solid amount of people dressed to the nines, but a sizable group was just chillin’ in jeans and solid tees.  I’ve never seen an American-style wedding that had a casual dress code.

The second anomaly I encountered was in receiving the invitation and preparing a gift for the betrothed.  Although I did receive a paper invitation, Seunghyeon (승현) approached me himself and verbally invited me.  That in itself made sense because I am the only foreigner at school and the invitation was written in Korean; he wanted to make sure I was clear on all the details.  But the surprise came when I learned that you don’t have to RSVP to the wedding or choose a meal beforehand.  This is somewhat speculative, but after attending the wedding it didn’t seem like it mattered how many people actually showed up.  There were no assigned seats and there was a large group of people standing in the back.  There was also no registry; it’s customary in Korea to give the couple an envelope with cash (usually an odd-number-starting denomination like 50,000원 or 30,000원).  Korean people usually give gifts mainly in the form of cash, letting the recipient spend the money as they please.

~Money on my mind~

Next, let’s talk about the venue and timing of the event.  Where do people usually get married in the U.S.?  A church! Or a scenic/historic place.  Or a large hall, outdoor venue, or place with personal attachment.  In Korea however, people get married exclusively  in wedding halls.  These halls are large venues with monstruous parking lots and mirror the Korean aesthetic.  They are bright open venues with cute details, good lighting, and multiple halls to accommodate 3 or 4 weddings occurring simultaneously.  It’s kind of like a movie theater with each theater housing a different wedding and the concessions area/lobby being the atrium and banquet hall.  The ceremonies themselves only last about 30 minutes with some time left afterward for group photos.  Like most aspects of Korean culture, it’s all about being in and out quickly and efficiently.  What’s more is that wedding receptions are conspicuously missing.  The ceremony leads directly into the meal time and afterward, everyone just goes home.

Which brings me to my favorite part of Korean weddings, the meal.  I like the idea of choosing meals in the U.S., but the cost per plate is ridiculous and the food quality is usually not earth-shatteringly great.  In Korea, the wedding halls include a banquet hall, where guests walk around buffet-style and snarf all the food to their heart’s content.  Compared to American-style weddings, I think this process is more logical.  However, it loses a little bit of the personal aspect.  Guests from multiple weddings dine simultaneously and there is open seating, meaning that it’s almost impossible to tell who is there for which wedding.  There is no table 13 where you sit next to the bride’s third cousin Susie and attempt small talk in vain.  What a loss.  Maybe the wedding hall culture only works in Korea, where the population density is high and people tend to all follow the same trends unabashedly.  I’m not sure it would work as well in the U.S.  I’m really not sure.

I regret not taking more photos of the venue and the wedding itself, but I was trying to stay lowkey.  Who am I kidding, it’s impossible for a tall foreigner like me to stay lowkey in Korea.  I kind of felt like a wedding crasher, part wedding crasher and part celebrity.  When we took large group photos after, another teacher said, “his wedding photos will be special because Nate (a foreigner) is here.”

I guess I forgot to take photos after getting caught up in the moment.  And this is something that I tend not to regret too much.  I get annoyed when people are living their lives through their phone cameras, so I tend to keep mine in my pocket during events.  I did get one gem though.  승현 is the homeroom teacher for 2학년 10반, the second grade tenth class.  I also teach those boys and I was really intrigued when I heard that they were going to the wedding as well.  As far as I know, teachers usually don’t invite current students to their weddings in the U.S.  In Korea, teachers have a special custom of inviting their homeroom students to sing or dance at the wedding ceremony, a special treat reserved for teachers.

10반 tends to have a crazy energy, but I was impressed by the short dance number they put together.  I think they did their homeroom justice and added some special flair to the wedding atmosphere.  Overall, my first Korean wedding experience gave me more insight in the Korean mindset of efficiency and spectacle.  What do Korean people want to highlight when it comes to love?  What is the true purpose and significance of a wedding ceremony?  Obviously when it comes to living abroad, it’s impossible not to make certain mental comparisons of where I came from and my newfound homebase, but usually the conclusions I draw have nothing to do with what is better or what feels more natural.  The conclusions I come to usually fall within compromise, just realizing that good and bad, sensible and absurd all occur no matter where you live and analyzing them boils down to the specific cultural context.

When I choose to say “I do” in the future (probably not too soon for you hopeless romantics out there), I’d love to incorporate some things I learned from Korean-style weddings.  This is the compromise I was referring to; it’s not about the comparisons you make between cultures and dwelling on differences, but realizing there are always new things to learn from an experience and incorporate into your own life.  This is especially true on a person-to-person level.  Next time you get into an argument, think about the other person.  There’s got to be at least one thing they’re doing well in their life that you could learn a thing or two from.  I will probably not have students dance at my wedding or get married in a wedding hall, but be certain there will be a small influence I picked up from my years living in Korea.