One of the more peculiar segments of my weekly schedule in Korea occurs on Sundays at an unassuming elementary school called 서원초 (SeowonCho).  From 1:30-5pm, my time belongs to a group of Ajjeossi’s (older men, usually between 40 and 60 years old).  There are of course other people: my friend 명렬, college students and the occasional woman as well, but I’m probably what most would consider a little out of place.

Given that I am not an old man, I am not Korean, and I’m not an elementary school student nor in any way affiliated with such a school, you may be asking yourself, “what is Nathan doing for 3 hours every week at this mystery location?”

The answer in fact is something that I used to do in middle school and recently got back into.  명렬 was actually the one who first invited me to go and got me excited to play volleyball again.  He’s a little bit younger than myself, so I thought that we’d be meeting a bunch of his university friends for a pickup game.  I was pretty shocked when we arrived the first time and the average age of the players fell somewhere in their early 50’s, but then I was more shocked by how well they play for their age.  Sometimes it can be awkward for older Koreans and younger Koreans that aren’t family to interact in social settings (sometimes even within families they feel awkward), so I was genuinely surprised to arrive to a gym full of older men.

My reintroduction to volleyball actually started back in March or April and I’ve become a regular at the volleyball club, an unofficial member.  It was slightly uncomfortable at first because I wasn’t sure what would be natural for a young foreign man (dashing if I may say so myself) to say to some elderly Korean men. Over time, it wasn’t important.  Like music, sports exist within themselves and can be experienced the same way all over the world.  There is no wrong way to be part of a team and because I’ve got the walk to back up the talk (or in my case, less talk because I’m still a bit hazy on volleyball terminology in Korean) I was eagerly welcomed into the group.

I cannot stress enough how competitive Korean people of all ages can be, but at least when it comes to sports I feel right at home.  The club’s coach especially has always been kind to me, offering tips to improve my volleyball form and offering me fruit or other food to take back to my home.  Sadly, I have no pictures from practice because I usually don’t bring my phone.  So instead here are a few pictures from my smashing success of a housewarming party.

Many of you guys may not know, but I was actually fairly disappointed in high school that the boys’ volleyball and tennis seasons coincided with each other and I was forced to choose tennis over volleyball.  Starting to play again in Korea helps me realize that it’s never too late to rekindle any form of passion, especially seeing these geezers (here read affectionately) light up the volleyball court week to week.

From my approximately six months of playing with these guys, here are a few stand out memories:

I hope to keep up this Sunday tradition and continue to play volleyball when I’m back in the U.S. later on.

Again, due to a lack o f volleyball-relevant photos, here are some from an October trip to Busan.

Let me just take a brief moment to tell you more about 명렬 (Myeongryeol), probably my closest Korean friend, my volleyball buddy, and overall a great human being.  He’s technically my 동네 친구 (neighborhood friend), but he’s going to school in 천안 (Cheonan, a nearby city) at the moment.  We met about nine months ago after he had just finished his military service and was living at home near my homestay.  This fall he started up his studies again and is going to a science and technology university about 35-40 minutes from Cheongju.  In the future he’s considering becoming a pharmacist, but first has to pass an extremely competitive exam.

We spend a lot of time together playing sports, meeting friends, going to Seoul, studying, cooking, and just trying to do fun things.  We can communicate in English or Korean which makes meeting up really interesting and we’ve met a lot of each other’s friends.  One of my favorite memories of him… he was reading some type of medical text in English and came across the word “palpitations”.  He asked me what it meant and then proceeded to pronounce it… somehow it ended up being “power potato”.  I’ll never forget that funny little moment. 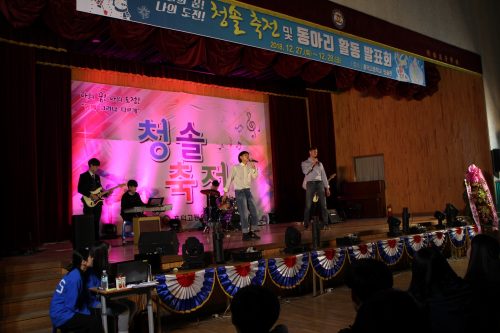