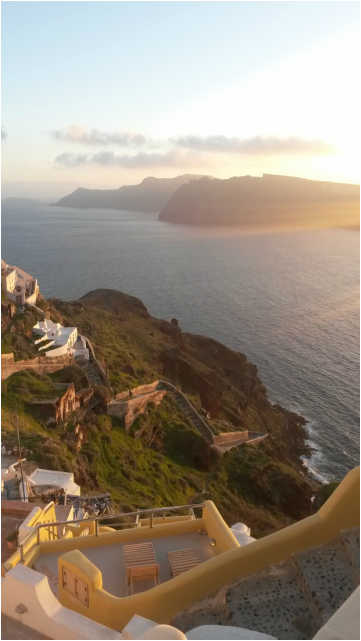 “This tale begins on what seemed like a normal night: Friday, February 27th, the night before flying from Copenhagen to Athens, Greece.  The setting: Nutid, one of my favorite Copenhagen cafes.”

I was sitting there, drinking peppermint tea with a friend, when unexpectedly I received a call from my host mom.  While I had been enjoying my last night in the city, much had been happening elsewhere. Inger informed me that SAS, the airline I was to fly with, was on strike and many flights had already been canceled.  I quickly checked the website in a frenzy, and thankfully the flight was still on schedule.  Not only that, but Inger told me that one of my friends (who I was to be traveling with) had been hit by a car that night.  And YES, he’s okay now (recovering from shoulder surgery), but it was surreal to say the least.  And then there were 5, getting ready for a week of adventures.

The next morning we were driven to the airport, all giddy and excited to travel independently around Europe.  Literally the moment we arrived at the airport our flight was canceled and the airport was in absolute chaos.  There were many times we felt ready to give up, but after hours of waiting, frantic phone calls, pestering airport employees, and using every ounce of our cunning and perseverance, we secured a new flight and arrived in Athens by 11 p.m. (only hours after our original arrival time).

Athens is one of the most interesting cities I’ve ever experienced, from the unique integration of ancient and modern and the amazing views of the sprawling city from the Acropolis and hills surrounding the Agora.  Our hostel was also situated only minutes from the Parthenon!  The weather was disgustingly nice and it felt amazing to walk around without a winter jacket.  The stage was set for the 5 of us (Amanda, Ellen, Elizabeth, Rebecca, and I, without Tyler) to have a great time. We even lucked out because all of the Athens museums are free the first Sunday of every month, something we hadn’t realized before planning the trip :).

Seeing the Acropolis in person was really overwhelming to say the least.  Learning about ancient Greece since I was about 8 years old had helped build the suspense up until seeing the real place.  I broke out my iPod and listened to the entire Disney Hercules soundtrack at all of the famous ancient sites. The highlight was definitely listening to ‘Go the Distance’ while watching the sun set over all of Athens.  The food was also amazing.  Shout out to my friend Vicki Mourikes (back at U of I) for recommending an amazing Greek pastry (Boughatsa) and a tasty restaurant called Tsitzikas Kai Mermigas near the Syntagma Square.

We accomplished a surprising amount from two days in Athens, but then it was time to move on to Santorini.

3 of our group woke up at 5 a.m. to take a 7+ hours ferry from Athens to Santorini, while Amanda ad I opted to sleep in, find a delicious breakfast, and fly to Santorini later in the day.  We arrived around 4 p.m., dumbfounded by the amazing views from the landing airplane and excited to arrive at our cavehouse AirBnb in the historic town of Oia.  The view was to die for, these beautiful white houses on layered terraces, overlooking the ocean and volcanic cliffside.  We explored the area a bit and settled in for a nice (rowdy) wine night at the house.

The next day, we packed our lunches and set out for a 7 mile hike from Oia to Fira, the capital of Santorini.  The hike was almost like a spiritual experience, feeling the wind and sun on our faces and appreciating the outdoors like we haven’t been able to do in the cold of Copenhagen.  We rewarded ourselves with some tasty gelato in Fira before taking the bus back to a nice dinner in Oia.

After enjoying the famous Oia sunset from our very own terrace, we explored local shops before settling in for the night.  We awoke the next day and headed out for a black sand beach on the other side of Santorini.  That afternoon (Wednesday), the group split up.  Elizabeth and Ellen stayed in Greece for the remainder of the week, Rebecca traveled to Tel Aviv for Purim, and Amanda and I continued on to Rome (Florence being Amanda’s final destination).

After the beautiful weather in Greece, it was strange to arrive in Rome to chilly temperatures and pouring rain.  I also couldn’t believe it when I ran into one of my old friends from back in Western Springs, Sam Telfer, at the Athens airport.  What a small world.  I stayed at the Yellow Hostel near Termini Station in Rome, perfectly situated and with a great mix of people from all over the world.

On a rainy Thursday, I visited the Colosseum and the Vatican with Amanda, Kelly, and Elior, both amazing places to see.  I’m also fairly sure the umbrella sales went up 1000% that day; boy was it coming down hard.  Friday and Saturday were considerably nicer, with bright sun and a light wind making for perfect walking weather.  I ended up visiting the Forum, Pantheon, Trevi Fountain, a couple Italian markets, shopping on Cola de Rienzo, getting an Italian haircut, and going out at night with some Italians that were extremely nice.

Some of my favorite memories from the entire week were simply enjoying the beautiful places with some great company, talking about life, and meeting locals that were incredibly nice and willing to show me around.  Traveling always reminds me that no matter how far you go and different a new culture may be, people can relate to you on an instinctual level.  It’s special to connect with another human being, regardless of a language barrier or cultural stereotypes or differences of opinion.  I hope that my future travel holds the same excitement.

p.s.  The weather is Copenhagen is finally improving!  Spring has arrived.