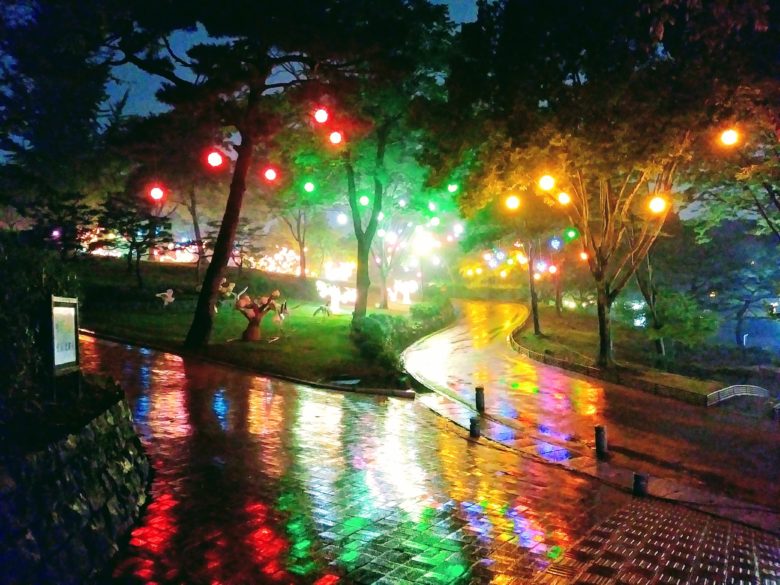 It is Chuseok Eve (well the afternoon before) and the house is filled with the smells of culinary trial and error, the pitter patter of knives on wood carving boards, and the omnipresent devil dog barking at dust bunnies and anything with the audacity to move or make sound.  The coming of fall has been long-awaited, but the air is crisp and I appreciate not sweating through my outfits at school.  The month of September was certainly one for the record books.  I have now been teaching for 6 weeks.  During that time, I’ve learned to adjust to some of the things that can go wrong in class.  Like when your students decide to stand up on their tiptoes to touch the projector (they’re still in awe that I’m tall enough to do so without a chair, so I’m flattered they copy me) and the projector goes AWOL for a class period.  Or when my crazy girls’ class decided to start acting up and I had to banish six girls to the hallway for some calm down time.

Despite the moments of struggle and doubt, the year is unfolding to be rewarding in so many ways.  Sometimes it seems like my teaching antics or goals aren’t working the way I’d imagined, probably something that happens to teachers and educators all the time.  It’s hard to plan a lesson to be interesting and fun, but even more so when the lesson is in the student’s second or third language.  Some of my students are comfortable speaking English like it’s nothing and some can’t speak a lick of it.  This makes my job more challenging to teach somewhere in the middle, a happy medium, but more rewarding when something actually works out.  The month of October in general is pretty strange as well, because I only teach for 11 days.  The Chuseok (like Korean Thanksgiving) holiday vacation is ten days long, then about a week later the students have 3 days of midterm exams.  Later in October, I attend the Fulbright fall conference in Gyeongju for 4 days.  It’s like an extended month of vacation, so I can’t complain much about being overworked.

It’s been a month since I last posted, mostly due to the volume of traveling I’ve been doing.  At the end of September, I visited the city of Daegu with three of my Fulbright ETA buds, just a day and a half to escape getting caught in the cycle of teaching and sleeping.  It was nice to see them and take a step back from a little bit of culture shock or niggling thoughts of not doing enough or not being qualified that many first-time teachers have.

Upon arrival in Daegu, at the junction of our four separate buses, we spent a good chunk of time catching up in a nearby café over coffee, ice cream, and tiramisu.  It’s nice to decompress and regale our similar struggles, concerns, and triumphs.  From there we made our way to a famous restaurant in Daegu (known for what’s called 천천천, cheon meaning 1000).  This combo is three dishes that are all 1000 won (less than $1 each) and notoriously spicy.  Somewhat of an ongoing joke is that most Koreans think Americans can’t handle eating spicy foods.  If they meet my dad, they will 100% be proven right.  But, spicy food in Korea isn’t the same level of spice that we might equate to an Indian meal or Mexican meal.  Nevertheless, our cheoncheoncheon was actually making me feel the burn.

One of this group’s established patterns is to find a city’s nearest mountain and conquer it.  In Daegu, we planned to visit Apsan (remember, 산/san is the word for mountain).  We hopped on a bus from the restaurant and ventured out of the city a little way.  At the base we purchased tickets for a cable car and made our way up to the summit of Apsan.  The top offers a breathtaking view of the drab gray apartments of Daegu and the urban sprawl beneath. [ASIDE: The last time I rode a cable car up a mountain I fainted, so coming out unscathed was a huge relief].  The light was shining magnificently, peeking through the dusk clouds to frame some perfect photos along our brief but awestriking hike.  And if you’ve kept up with my stories thus far, I think this next bit will not in the slightest come as a surprise.

We made our way down Apsan with the setting sun staring us down.  It was settling to arrive in a massive city and immediately leave city hustle and bustle to seek out nature and a more peaceful place.  But now, our spirits were beginning to dampen as the inevitable ‘hanger’ (hungry-anger for my distinguished readers) was coming forth from the nascent night shadows.  Back in the city, we walked around for a bit seeking restaurant refuge, but the area was devoid of life.  And for some reason the streets were filled with an excess of outdated sewing machines, a strange mechanical graveyard like a setting in a Ray Bradbury story.  Eventually, I stopped two Korean girls to ask if they had a favorite restaurant nearby.  I knew immediately from their expressions (first, surprise that I asked in Korean and second, laughter that anyone would look for food here) that we would have to move locations.  We hopped on another bus to head downtown, where we eventually found exquisite Thai food.

This short trip marked the first time that I was traveling without a predetermined place to stay.  We opted for the adventurous choice of Jjimjilbang, which seemed good at the time, but we later discovered this meant sleeping on the bare floor with a tiny pillow.  By far not a comfortable option, but definitely an experience we will not forget.  I awoke early the next morning with high hopes for the day and a stiff back.  The consolation with a Jjimjilbang is that after the hard night’s sleep you can relax in the sauna area and heated pools before emerging into the world.  With a more intense morning ‘hangry’ feeling, we ferociously google-searched for brunch.  And wow, we found this little mecca with a scrumptious brunch feast, amazing patio atmosphere, and very reasonable prices.  Our last hurrah in Daegu was my first trip to a cat café, literally littered with cats of all shapes, sizes, and temperaments.  It was a novelty, but not one which I will be frequenting.  I’m sure the cats are well cared for, but the impression still is that that many cats in one place seems unnatural.

Most of my recent adventures have been outside of Cheongju, traveling on the weekends or when my school doesn’t have classes.  After the weekend trip to Daegu I next headed to Jeonju, one of the most traditional cities in Korea.  I went with one of my Korean friends who was actually born in Jeonju.  He hadn’t been back in over 10 years and thought it’d be nice to revisit old memories and landmarks, like the church in which his parents were married.  I had some extra travel time too because my students had a three-day class trip.  My host family must think I’m crazy for trying to fit in all these excursions, but I didn’t know that fall semester would have so many days off.  Stepping off the bus in Jeonju, I could sense something very traditional, more rooted in Korean culture than a city like Cheongju.  Many people in Jeonju walk around the crowded Hanok Village (houses in traditional architecture style) wearing Hanbok, a traditional robe garment.  This time I chose not to rent out a Hanbok, but I’m down for a little public gaudiness if they carry one in my size.

My friend (Ash) and I started off the weekend walking alongside the river.  Jeonju is actually quite beautiful, a nice integration of old and new, city and nature.  We then found our way to a chimaek place (chicken and beer) and indulged in a full plate of spring onion chicken and a sweet potato pizza.  This was probably too much food for two people, but isn’t vacation about decadence and excess?  After some beer, I was fearless in mastering a claw/crane game at one of the places nearby, somehow finagling my way into 5 plushy toys in one attempt.  The funny part about wandering Jeonju was that I happened to run into some of my students while they explored the Hanok Village as part of their school trip.  Particularly, one girl saw me from afar with my sunglasses on and stuffing my face with fried octopus.  She stopped, did a double-take, then a triple-take and finally screamed my name.  That started the avalanche and soon enough everyone rushed over and I was explaining why I was there and taking photos.

Flash forward a couple weeks and I was making my way home for the 10-day Chuseok holiday.  I’ve been spending some Saturday mornings volunteering with a program called Korean Bridge Initiative (KBI), through which local high school students meet foreign teachers to practice English at no cost.  I thoroughly appreciate the spunk of these students and how personable and invested they are in personal growth.  I guess I give off a comfortable vibe (at least compared to the other teachers there) because one of the students mischievously asked me if I have tried edibles (marijuana) before and then smirked when I asked why.  Korea always keeping me on my toes.

Sunday morning came around and I found myself on yet another bus, this time headed to the city of Jinju.  Around Chuseok, Jinju hosts a renowned lantern festival and I decided at the last minute that I had one day to spare to see it.  Sunday morning brings to mind imagery of pitter-pattering raindrops on your bedroom window (thanks Maroon5), but the rain on this occasion actually began later that afternoon.  It began as a sprinkle so we took shelter in a rainforest café (ironic given the weather and also not the gimmicky chain restaurant of the U.S.).  The sprinkle quickly turned into a torrent and we realized that night we would be accompanied by a clingy rainfall.  With our umbrellas at the ready, the rain lasted the entirety of our festival adventure, six hours of walking and admiring pretty lights and festival fixtures.  I experienced stages of wetness, eventually succumbing at the end of the night to a complete subdermal saturation.  But I must say the rain made the night quite magical.  There was a constant glow magnified by the wetness.  The festival lights and lantern pieces had a palpable aura, the sidewalks glistened and each tree branch became a prism that projected color and light and excitement out in scattered beams.

Remember that subdermal saturation I mentioned?  After some point, I don’t remember feeling wet; the wetness was so complete that dryness wasn’t applicable in any sense of the word.  It reminds me of playing soccer in the rain when I was little, the age when you don’t care about wetness or getting dirty.  You’re outside for the game and the fun and the experience.  And when hordes of people began leaving the wet festival after the fireworks display, I realized that despite the rain and cold it felt nice to be there for the experience and forget about what would be more comfortable or sensible (in the adult kind of way).  Sometimes you just listen to your heart and your body will suck it up and eventually enjoy the ride.

The Chuseok part 2 post will be appearing very soon, featuring my holiday experience and also more travel stories.  I’m almost caught back up, so thanks for staying patient. 🙂